Elephant Head: Porth Chapel, St Levan
Its massive torso had fallen, helpless,
Causing a minor eruption at the cliff-face: a fissure
And its sluggish trunk had swathed at the tide,
Whipping up the current
To a cauldron of abuse,
Rendering sunken boulders tumbling loose,
To rumble into the cove below,
Piling up on once flat, sodden sand
And interrupting the turquoise ocean’s merciless flow.
But its gigantic head lay crestfallen, hopeless… 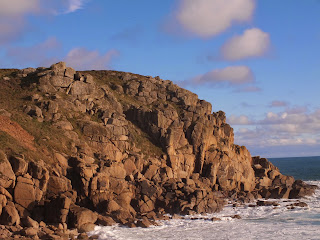 The lower cliff path to Porth Chapel’s stunning beach was closed, due to falling rocks I presume but the Porthcurno side of the cove, a mass of rock, reminded me of an elephant, lying still, which gave me the idea...﻿
Posted by The Mowdog... at 13:41